At the risk of being the fun police here’s the not so fun stuff about helium balloons.

How long do helium balloons last?

Our standard size helium filled latex or rubber balloons float for approximately 12-18 hours. Both temperature and movement will affect the amount of time your balloons float for. They like to be kept comfortable, not too hot or cold and not be buffeted around excessively. For an additional cost we can treat the balloons with Ultra HIFLOAT to extend the float time for up to several days.

Foil or Mylar balloons last a week or so, they just get less firm as the time goes by.

Is it ok to release helium balloons?

NO you run the risk of the balloons ending up in our oceans, waterways or elsewhere as litter.
There are restrictions in place. Fines apply if 20 or more balloons are released at or about the same time (whether by one or more than one person).
You will find further details here

Can we fill balloons purchased elsewhere with helium?

Yes. We will never be able to stock every type of balloon available so we can fill balloons purchased elsewhere that we don’t stock. We cannot guarantee float times or replace faulty balloons that are not the same brands or quality that we stock.

Is it safe to breath in helium to make funny voices?

NO. People have died from breathing in helium.

Yes we know you have probably seen other people doing it in the past, even on TV or in the movies, but it is not safe to do so. There is plenty of information out there, you may like to Google ‘Helium Inhalation’.

Helium is a non-flammable, odorless, inert gas that will not burn. Because helium is lighter than air, it gives floating balloons their lift. Always keep cylinders secured even if transporting, if a tank is punctured or knocked over, the gas can escape with such force that the tank can be propelled at a very high speed.

What about disposable helium tanks?

If you are thinking about purchasing a disposable tank make sure you read the fine print on the box for the volume of helium in the tank. Disposable tanks for 50 balloons only blow up 50 small balloons while a rented helium tank will blow up 50 larger standard size balloons.

Disposable tanks are not refillable and here in Australia they cannot be put out for recycling so they will end up in landfill after a single use.

Rental tanks are much better for the environment and the volume of helium you get.

Still have questions about helium? 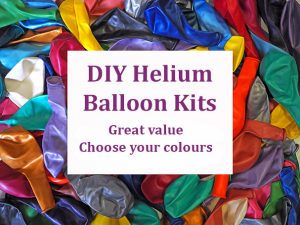